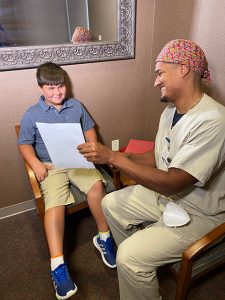 When 10-year-old Mason Yerby woke up one Sunday morning, he had severe abdominal pain, and his parents knew something was wrong. They went straight to NRMC’s Emergency Department. After a CT Scan, they learned that Mason had appendicitis. General surgeon Dr. Steven Jackson met with the family and explained that Mason needed an appendectomy. Mason wanted to know if he could see his appendix after it was removed. Dr. Jackson said they can’t really do that, but he’d take a picture and show him. Two hours later, the appendix was out and the young baseball and football player was resting comfortably in his hospital room.

“Dr. Jackson made us all feel at ease immediately. I knew my baby was in good hands. He was so down to Earth, and explained everything so well and answered all our questions. Even the way he showed the photo of the appendix to Mason afterward made a difference,” explained Amy Yerby, Mason’s mom. “The next morning Dr. Bill Ball came in to check on Mason, and told us he was doing great and could go home. Both Dr. Ball and Dr. Jackson were excellent. In no time, Mason was ready to be back outside and playing his sports, but we had to remind him that he just had surgery and needed to take it easy a few days.

His recovery was amazing.”