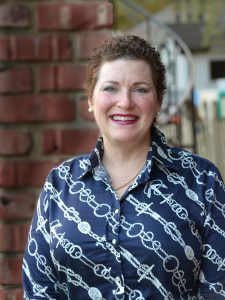 Eliza Brittain Behrendsen is no stranger to breast cancer. Her mother and mother-in-law passed away from it.  As life sometimes goes, Eliza was caring for her mother-in-law when she herself felt a bump of sorts in her breast. Thinking it was just a cyst, Eliza thought she might need to get it drained. A busy mother of two high school aged sons and active with many projects and community events, Eliza really hoped the bump was nothing. However, somewhat concerned she mentioned the “cyst” to her sister, Dr. Marguerite (Cissy) Picou.

Dr. Picou immediately advised that Eliza get a mammogram. When Eliza had the mammogram, radiologist Dr. Ben Hogg said there was a spot that concerned him. He ordered an ultrasound which lead to a needle biopsy of what he believed was a mass. Eliza went to general surgeon Dr. William Ball, Jr. who confirmed the mass was, in fact, cancer.

“My first reaction was to get a mastectomy, but Dr. Ball said there were other options,” Eliza explained.  “He first tested lymph nodes, and there were no signs of cancer which was really good news. However, the mass was growing quickly, suggesting an aggressive cancer. I needed to have a lumpectomy as soon as possible.”

“Dr. Ball has extensive training and experience with breast cancer. I knew he can do what surgeons at world renown places can do, and I trusted him to do what needed to be done. I had my surgery at NRMC, and Dr. Ball removed a fairly large mass, but you can barely tell now where it even was. The surgery went well,” Eliza explained.

“From Shay Ball, who is a nurse in Dr. Ball’s practice, to the nurses on the surgery unit, I had excellent care and great support.  I felt taken care of and that everyone had my best interests at heart,”  Eliza said. “I had the best possible surgery recovery. Chemotherapy and radiation therapy followed the surgery, and I am grateful to my husband who went with me to the treatments, and my supportive brothers and sisters really helped me.”