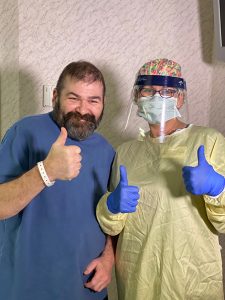 Christopher’s bout with COVID-19 began with the common symptoms: chills, shortness of breath and coughing. Yet when his condition began worsening rapidly, he decided to go to NRMC’s Emergency Department. Within an hour, the ER physician told Christopher he had tested positive for COVID-19. Given the severity of his illness and his complex medical history including diabetes, Christopher was admitted to the hospital.

For the next several weeks, Christopher was in the Intensive Care Unit under the care of Dr. Anil Matta, Hospitalist, and Dr. Warren Botnick, board-certified Pulmonologist. Christopher spent six days on a ventilator, but gradually began to improve.

Christopher explained that besides the physical toll of having COVID-19, there was also an emotional toll from being separated from his family. He explained that one of his nurses, Seth Johnson, RN, sat and talked with him for a long time reassuring him that he was going to be ok. “Seth would stop by to check on me. One day, he even had a surprise – a cell phone, so I could call my mom. Seth played a big role in helping me get through this ordeal,” Christopher said.

As Christopher began to improve, doctors moved him from the ICU to an isolation room. Respiratory Therapist Melissa Remo provided breathing treatments during the third week of Christopher’s hospitalization. “Several times that week, Melissa would ask to pray with me. That was above and beyond, and I was very grateful,” he said. “The team at NRMC saved my life!”