Medical center thrives by zeroing in on community’s needs, expanding services and access 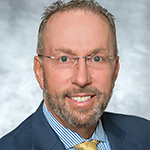 When Kirk Soileau took over as chief executive of Natchitoches Regional Medical Center in central Louisiana in 2013, the hospital had 57,000 patient touch points a year. In 2019, that number had climbed to 220,000 even though the population of the city and the parish of the same name have stayed stable at around 17,800 and 38,000, respectively.

Soileau co-led a session at the American Hospital Association’s Rural Health Care Leadership Conference earlier this year. In that presentation and in later interviews, he discussed how the 96-bed hospital has managed to expand its services through increased operating revenue while dozens of other rural hospitals have closed their doors in recent years, including at least 16 so far in 2020.

“Our approach is to find out what do we need to do to be successful and then we do what we need to do to service this community,” says Soileau, who works for CHRISTUS Health, which since 1997 has managed the not-for-profit community-owned hospital. The hospital is overseen by a seven-member board appointed by the parish president. Soileau is the hospital’s only CHRISTUS Health employee. 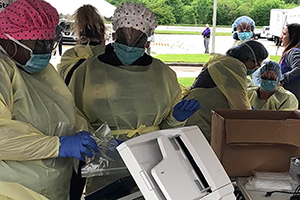 Workers at Natchitoches Regional Medical Center in Louisiana prepare to test for COVID-19 at an outdoor clinic.

The community hospital has recruited specialists and opened a primary care and a walk-in clinic along with specialty clinics. It is contracting directly with several large employers including the city and the parish to provide urgent care. It worked with state and federal officials to secure changes that improved access to care for low-income patients and upped insurance reimbursements. This year, the hospital has capital projects totaling about $15 million underway or completed.

Soileau says the service expansions haven’t changed the nonprofit medical center’s bottom line. It remains a break-even operation that receives no tax support, but it provides many more services in the community than before. In addition, since 2013 its staff has grown from 430 with a payroll of $22 million to 830 with a payroll of $37 million.

Listening to the community
Shortly after he accepted the hospital’s top job, Soileau went on a listening tour. “I got in front of every constituent group and said: ‘What do you need? What are you hearing? Tell me,'” Soileau recalls.

The consensus was that the hospital wasn’t seen as a good choice for health care. That was backed up by analytics that showed 82% of residents were leaving town for services the hospital provided. (Patients from the Natchitoches area have always gone to CHRISTUS Health hospitals in Shreveport or Alexandria for tertiary care; both cities are more than 50 miles away.) 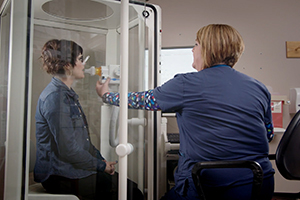 A clinician at the Pulmonary Associates clinic at Natchitoches Regional Medical Center in Louisiana tests a patient’s lung capacity. The venture is part of a network of 17 clinics and facilities that are affiliated with the medical center.

In addition, with its location in the third poorest city in the state, much of the Natchitoches hospital’s patient population relies on Medicaid for coverage, but until the hospital opened its network of primary care and specialty clinics, few clinicians accepted patients insured by Medicaid.

Top chef
One of Soileau’s first moves was to stem the out-migration of patients by setting up a physician group and recruiting specialists and primary care doctors who are employed by the hospital. He says he has lured specialists to Natchitoches, the oldest city in Louisiana, in part by selling them on the beauty of the place and in part by promising them plenty of independence to expand their practices.

“We interview lots of doctors and then we bring in a bunch and we don’t put a lot of offers out there,” Soileau says. “When we do I tell them the story like this: If you’re a chef and if you’re a chef that needs to follow a recipe and only likes to cook by a recipe, this is not the place for you because our cookbook is a blank slate and you tell us how to make it work.”

The hospital also developed what Soileau calls “strategic partnerships” with physicians to jointly own and operate specialty clinics. By this year, it had set up eight joint ventures. Most of the ventures are with physicians with independent practices but a few are with doctors who have, subsequent to the ventures being set up, become employees of the medical center. “It’s been mutually beneficial not only to our medical staff but also for the community,” Soileau says of the physician partnerships.

Clinic network
The ventures are part of a network of 17 clinics and facilities that are affiliated with the medical center. Over the summer, the hospital opened a 17,000-square-foot multispecialty clinic opened across the street. It employs all the specialists. Practices include orthopedics, general surgery, pulmonology, urology and ear, nose and throat. The setup reduces overhead as doctors share diagnostic imaging and lab services in the building.

“We were able to take these six different physician practices, eliminate their labs, eliminate their office managers and everything that was duplicated in each clinic and we’ve consolidated them and made them much more efficient and much more cost effective to manage,” Soileau says. In addition, the clinic building runs on the excess capacity of the hospital’s heating and air conditioning system.

Early next year, a closed-door pharmacy that is eligible to take part in the federal 360B discount program will open at the clinic. “It will mean a staggering difference in price that we can buy medication,” he says of the 340B program, which is open to patients seen within the hospital’s network. A project years in the making, Soileau says the outpatient pharmacy will give low-income patients access to affordable medications, as the 340B savings will be passed on to pharmacy customers. This is especially important to stabilize patients following hospital discharge and it is expected to reduce the hospital’s avoidable readmission rate.

The city, with about 200 workers, was the first to sign on to Access Care. More recently the parish, Alliance Compressors and another large private employer, a group of state workers and the hospital itself have joined. The program now covers about 6,500 people and results in about 12% of the combined visits to the urgent care and primary care clinics.

“The sell to the employers was that we guarantee if you do this you will reduce your medical spend for your associates. So, if (employees) have a cough, we treat the cough before it becomes pneumonia and they have to be admitted to the hospital,” Soileau says, adding: “Every one of our employers to date have saved money year over year.”

The CHRISTUS advantage
While the health system does not provide any direct funding to the medical center, Soileau says the hospital benefits in many other ways from its connection to CHRISTUS Health.

Soileau captured cost savings for the hospital by joining CHRISTUS Health’s group purchasing programs, something he says the hospital wasn’t aware it qualified to join until three years ago. “When we signed that agreement, without changing one single supply, we saved $1 million overnight,” he says. “That’s just because an organization the strength and size of CHRISTUS buys in such scale.”

“We take on every opportunity to partner with CHRISTUS as best we can,” he says. This includes working jointly in clinical services, oversight and compliance.

Money back guarantee
Soileau is CHRISTUS Health’s advocacy officer for the state and he lobbies at the national level for favorable policies and funding.

When Louisiana expanded Medicaid under the Affordable Care Act in 2016, it helped cut the hospital’s bad debt almost in half, he says. However, because none of the independent primary care and internal medicine physicians in Natchitoches accepted adult Medicaid patients, the program’s patient population was using the medical center’s emergency room for nonemergency services and getting only episodic care. The state was spending $460 on average for every ER visit by an adult insured by Medicaid.

Soileau told state officials that if they could help the hospital persuade the federal Centers for Medicare & Medicaid Services to change the designation on its walk-in clinic to rural health clinic status, so those adult patients with Medicaid coverage could be treated there, the state would spend $115 per visit. “I said I guarantee you that if we do not reduce our nonemergent visits in our ER, I’ll pay you back,” he recalls.

Soileau’s pitch worked. The status change took effect Jan. 1, 2019. The hospital set a goal of reducing nonemergency ER visits by at least 20% in three years and Soileau says it was closing in on that goal this fall.

He credits part of the success to the work of an ER nurse who follows up with high-frequency patients to ask if they have a primary care doctor. She encourages those who don’t to take advantage of the rural health clinic for primary care.

The nurse started working with the top 60 “multi-visit patients.” In less than two years, she has managed to steer all of those patients to the clinic and eliminate their nonemergency ER visits.

“We now provide primary care for this beneficiary group seven days a week, 12 hours a day,” Soileau says. “We have the only clinic in the state that is open those hours. It has meant an amazing improvement in the health and wellness of these patients.”

Value added
Soileau is seeking a federal waiver for a trial program to charge patients insured by Medicaid a $5 copay for ER visits. He thinks that token amount will be enough to spur even more patients to use the clinic instead of the ER for primary care.

“What our ask to CMS is, is allow us to do a 24-month demonstration project where we, by providing access to primary care seven days a week, can show a reduction in Medicaid growth for nonemergent care (in the ER),” he says. “We believe it’s a no-brainer.”

This summer, his plan to launch a “Department of Innovation” got slowed by the pandemic. Soileau hopes to have the position of innovation director filled and the department started by the first of the year.

“All we’re focusing on is strategies to improve the care of our communities” he says. “How can we do it better, quicker, faster, with less resources?”

Kirk Soileau wants his leadership team at Natchitoches Regional Medical Center in Louisiana to mirror the community it serves in aspects such as race and gender. That was one of his motivations for starting a leadership institute for the hospital.

Employees who want to take part have to submit applications and references, undergo peer interviews and then be selected by senior leadership. They also have to commit to staying with the organization for at least three years or agree to repay the cost of their leadership training.

Participants get all-day training one day a month for nine months from Human Dynamics, a leadership and human development company. They have to complete a capstone project that benefits the medical center by improving throughput or patient experience.

In its first year, 44 employees applied for the program. Fourteen were selected and graduated. “That’s our pipeline of emerging leaders,” Soileau says of the graduates.

Plans for a second class were slowed a bit by the pandemic but the application process is now underway. That group will go through the training next year.

To give his current leadership team time to bond and exchange ideas, he takes them somewhere off-site once a month. They spend the day talking about strategies for improving care. “This is mission critical to what we do,” he says.

Copyright © 2020 by the Catholic Health Association of the United States
For reprint permission, contact Betty Crosby or call (314) 253-3490.

« Back to Latest News